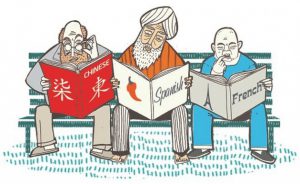 “…adults may over-analyze new language rules or sounds and try to make them fit into some understandable and coherent pattern that makes sense to them. But a new language may involve grammar rules that aren’t so easily explained, and adults have more difficulty overcoming those obstacles than children, who simply absorb the rules or exceptions and learn from them. That’s especially true with pronunciation, since the way we make sounds is something that is established early in life, and becomes second nature.” – Abby Abrams